Metalsmithing Class #4: So Close to Being Done!

OK, so lots of people, not enough tools, and a few snafus later and I'm not quite done with my ring yet. I really thought that myself and two or three other people were going to be able to finish them off last week, but it just didn't happen. Oh, well! 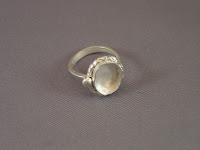 I finished getting the back of the ring face (which, coincidentally looks more like a watch face with that big ole spitball that I had to add) nice and shiny since this was the last opportunity I'd have to get at it without anything else in the way. Then, I took the band that I made in our very first class and sawed it open at the solder joint. Thank you to everyone who warned me to wear my safety glasses while sawing. A couple of people in class got a little giggle out of me, but I'd rather that than lose an eye! I did break the blade, by the way. It didn't snap back and get me, though! Oh, and I did saw into my thumb, just a little bit, too (it didn't even bleed). Weeeeeeeeeeeee!

It was after this part that I got into a little bit of trouble (well, more trouble). I was supposed to saw about a half an inch long up the center of either side so that it was a pretty V shape where it attached to the ring face. Well, for some reason when I sawed, I veered to the right and thus made one side of my V quite a bit skinnier on one side than the other. I saw that it didn't look good, but didn't truly realize my mistake until a couple of steps later.

I wrapped the wire around a ring mandrel and shaped it to my size, taking into account that the ring face would actually be a portion of it. Well, when I went to file down the ends to get a nice flush surface in order to solder it, is when I really realized the sawing mess I made. Once I started to file, one side of the V bent back. Oops. Susan said, "No problem. You'll just attach it with a V shape on one side and the other side will be soldered in the space in between." Cool, again, I'll be making a mistake into something unique and neat looking. So, I went back to filing and trying to get my nice flush surface. The same thing happens with the V on the other side of the band. Ggggrrrrrrrrrrr. I show Susan. "Well, it will work, it just won't look as cool." Insert sad face. Here it is after the soldering: 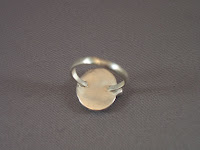 I needed to use a third hand in order keep the band from falling over: after I got through filing it, it was just a little too thin to stay upright on it's own.

Next step will be polishing and making it shine like a mirror. Then, I'll get down to business getting that shell in place. With any luck, I'll be able to finish it this week, but who knows what will happen next! Plus, this week's class is on the 4th of July, so we'll probably be a little bit more raucous than usual. Someone mentioned bringing in sparklers. I wonder if I should bring in a lighter so we don't have to use the torch to light them. . . =) 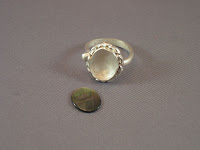 Posted by Athena's Armoury at 7:23 PM

I need to find a metalsmithing class--that looks like so much fun.
Beautiful work!