I Love My Tools 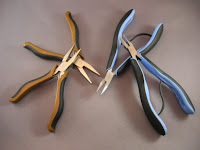 However, I don't know what's going on with them lately. A few weeks back, I was weaving bright aluminum with my lovely Lindstrom flat nose pliers. All of a sudden, there was a snap and then something hit me (hard) in the shoulder. I just thought that a ring snapped, so I went to pick up another one and noticed that half of the jaw on one of my pairs of pliers was gone! After the initial confusion, I went into shock, and then got very upset. That never, ever should have happened with those pliers: they are known to last for decades. Luckily, they are covered by a lifetime guarantee and I'm expecting a brand new pair to arrive in the mail this week. Yay! 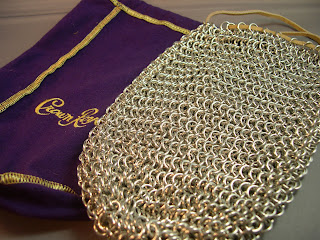 Over the weekend, I had quite a few projects going on. One of which is filling an order for an Uber Chain Maille Dice Bag (it's the size of a Crown Royal bag!). I coiled and cut rings until I ran out of wire and then had to tumble them to remove any burrs and make them nice and shiny. I walked away and when I came back, the barrel on my tumbler had stopped rotating. I opened it up and the belt finally broke on the thing. In not one, but three places! So, I got out my mini screwdrivers and went at it. Eager to get my hands dirty and fix my tumbler, I forgot to unplug it and suffered a mild electrocution. Sigh. All was well after that: I got the new belt in place, screwed it all back together, and finished tumbling my rings! 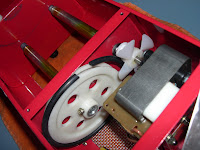 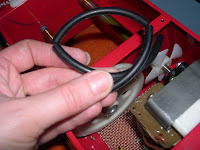 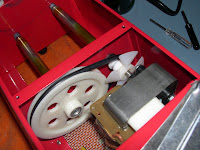 Apparently, the tumbler available from Harbor Freight has a reputation of easily breaking belts. I've had mine for two years and this is the first time it's happened. That said, if you experience belt problems with your Harbor Freight tumbler there is a cheaper alternative to purchasing a new belt. An experienced mailler I know recommended using the heavy duty rubber bands from broccoli. Apparently, he's been doing that for years to much success! Happy tumbling!
Posted by Athena's Armoury at 1:31 PM

Oh Yikes! I know artists are supposed to suffer for their craft, but I think you may be taking that to extremes! ; )

I'm glad the tumbler belt was easily replaced though. : )

:P Tell me about it. Between this and the bruises from the icky pliers and steel. . . I'm on a roll lately.