This blog entry is a part of the Blog Carnival for the EtsyBloggers Street Team.
Summer is notoriously slow for theatre. That said, we are able to do some prep work for the coming season and some maintenance that there wasn't time for while we're 'in season.' But we also spend a lot of time hanging out, drinking coffee, surfing the internet, and hiding from the folks in the Ivory Tower. I personally am lucky enough to have an office, so I plan on closing my door for a little while in the morning and then again in the afternoon so I can play with pliers. I'm hoping that the summertime lull will be a good time for me to continue building up my inventory as I prepare for ren faires! I was starting to think about the amount of goods I want to have in my booth. I plan on having a good selection of one of a kind items, some stuff that needs to be ordered (armor and clothing), as well as piles of production line kind of stuff. I thought that something like 100 Euro 4-1 bracelets would be a good start. This is the weave, but the pile o' pretty will not include the dangles: 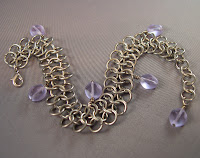 Also, with the slower summer season, Scott will be around a bit more often, too. Unfortunately for him, that means he's got to catch up on all of the house fixes he's been putting off. 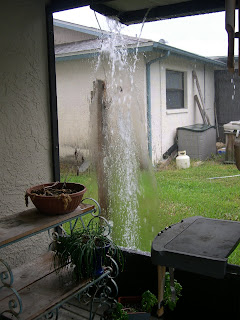 Posted by Athena's Armoury at 3:37 PM