Post Mortem = After Death. When I went to school for directing, we would have an analysis with our instructors and mentors after each show we would direct. This was called a Post Mortem. 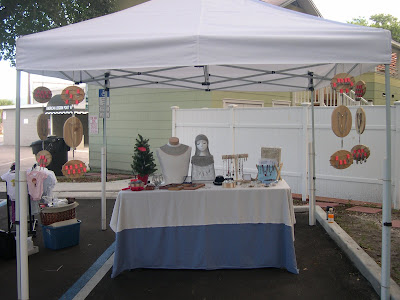 I had such a wonderful time at the Handmade Holiday Bazaar!! The weather was absolutely gorgeous, the live music was so groovy and such a nice extra, the food (from Limey's) was so yummy, and the women in charge (Stacey of ElleBelle & Julie of SewItsForYou) are the BEST (couldn't ask for nicer or more organized). It was so great meeting so many fellow Etsians: both fellow vendors and others stopping by the event to visit: it's nice being able to put a face to the name. I also had a fabulous time chatting with my customers - so many friendly, gracious, and complimentary people! The event was not a huge monetary success for me (I hear the economy is keeping most customers from spending at the craft fairs recently), but I had so much fun anyway it was so worth it.

Scott came with me in the morning to help me set up my tent: it was the first time I was using it. It's a good thing he came, too, I can't imagine how I would have done it alone. As it is, Dan (Stacey of ElleBelle fame's husband) had to help us figure it out (thank you!). I had every intention of having a setup rehearsal before the show, but was never able to get it done. It's super easy now that we know how to do it! Shortly after setup, Scott had to head to work which left me on my own for tear down which was fine until I had to take down the tent. Enter Doug (Mr. Julie of SewItsForYou) who helped me take it down and carry my stuff to my Jeep (thank you!). 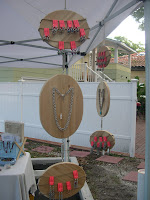 I had a plan to make weights for my tent, too: The event was in a parking lot so I figured I might need them since I couldn't use the stakes. I had the plan and Scott put them together for me so that I could focus on inventory and display. The plan: Four lengths (one for each leg) of PVC were filled with sand (Scott's idea, I thought of using quikcrete), add 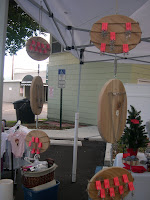 endcaps to them with some adhesive and the weights were all set! They worked like a charm, too: I was at one end of the parking lot and it kind of turned into a wind tunnel late in the day. I watched my display plaques blowing in the breeze and the top of the tent looked like it wanted to take flight, but luckily enough it stayed grounded. I do have to think about a way of securing the display plaques for the future, though. Although nothing happened that day, I can see them hitting someone if I ever have to deal with more wind.

Speaking of wind. . . Between the breeze and the sun going down, by the end of the day it was getting a bit chilly. I didn't want to put on my coat, though, because it would have covered up the majority of the chain maille I was wearing. Problem solved easily enough, though. I had been eying the adorable hats, scarves, and dolls by Wonderland Creations and the cool weather gave my the perfect excuse to grab my own monster scarf (there are pockets in tha paws!): 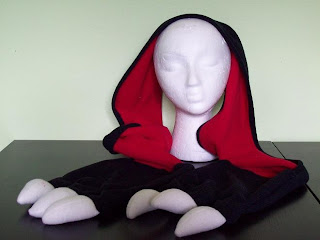 Nitty gritty self analysis:
I need to work on my tent and display. I love my display plaques and hope to use more of them in my tent display in the future (I used four out of the six I had made). In addition to coming up with new ways of showing items on the tables, I want to have one more table and maybe a rack or just something else interesting to look at. Also, if I plan on doing ren faires and pirate festivals, I will probably wind up using three walls, so I need to work on how to make the inside of the walls look interesting as well as a way to camouflage the top of the tent. I may have to recruit my MIL who has crazy sewing skills to help.

Another plus was my armor: many people were drawn into my tent simply out of curiosity when they saw my coif and mantle. Of course nobody at the craft fair bought armor, but it served the exact purpose I brought it for: to be eye catching. Once they were in, two things happened:
1. They started looking at my other work.
2. They asked questions about the armor which led to a greater appreciation of chain maille.

I loved* it when they asked questions because it gave me the perfect opportunity to take out a piece of wire and explain that every single ring in every single piece in my tent started from that. I explained to them that I coiled and cut all of my own rings before I was able to weave them into the pieces they saw before them.

I also had my pliers with me so that I could demonstrate the weaving process. I was making some more of the samples that I give out with my purchases: 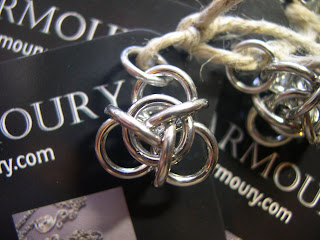 The weave is Tao 3 made with bright aluminum wire and can be used as a pendant, zipper pull, cell phone charm, key chain, thing-a-ma-bob. I had sent in twenty of these biz card/samples for the goody bags given away to the first customers that had shown up that day.

Overall, it was an excellent day and I really hope that Stacey and Julie organize another one!


PS -
Dear Blog,
I know I've been neglecting you. I am sorry. I will update more regularly, I promise. I promise to tell you about more women warriors, I know how much you love to learn about them. I also want to share with you some of the amazing Etsy items I've gotten recently. And maybe more fun than anything else: I've had the good fortune to receive a few giveaways recently (I never win anything and have been graced with a few!). I plan on spreading the good karma and will start to have a blog giveaway soon, too!
Thank you for being so understanding,
Janine
Posted by Athena's Armoury at 11:37 AM

Looks like you had a great time..and your booth looked very professional and inviting:-)!

Adding some walls or another table or something would be good, as the booth looks a little empty. Or what if you got one of those cool batik Celtic bedspreads to hang at the back? They're so pretty that I'm always drawn to booths with them.

Your little chainmail charm samples are a GREAT idea, by the way! That little 3in1 knot is so pretty.

I so enjoyed reading your synopsis
of the fair. Sounds like a
great time and your tent/display
looked wonderful. I agree with AJ,
a cool batik Celtic spread
hung at the back would add a dimension of mystique (like your
armour).

Hi AA - I love that Tao weave you use on your cards.

Thanks for the support and advice, guys! I had been thinking about using some kind of Celtic tapestry/batik bedspread kind of thing, and just ran out of time before the show to get one. For some reason, I was having a hard time finding them. But I totally want to do that or something similar on my back wall, I think. Also, as I make more inventory, I will have more of my wooden plaques and perhaps another table.