Not cat in coif (although I've seen that before), but updates on the cat and the coif.
Okay, the coif first. I keep forgetting to post these pictures. While Scott and I were still in the apartment, his sister and her kids (who live overseas) were in town visiting. They all so sweetly made a fuss about my coif and we managed to get pic's of two out of three of the kids wearing it and holding Scott's Gandalf sword from The Lord of the Rings Collection. Check 'em out. Don't they look awesome? 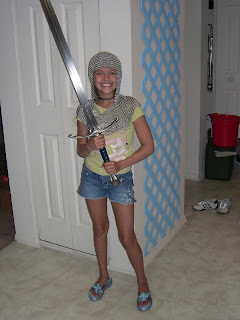 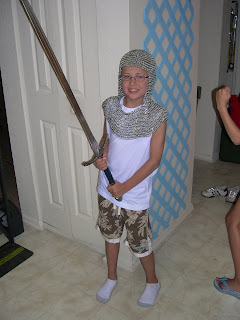 Okay, now the cat. After much stress of deciding what to do with her, I finally decided to go with my instinct of getting her inside. With no claws, it's just not right for her to be outside: no way of getting food, no way of defending herself, even no way for escape by climbing up a tree. So, I stopped by PetSmart on the way home intending to pick up only the very basics, just in case "Lost Cat" signs get posted over the weekend. I came home and I saw her across the street. I made the "psst, psst, psst" sound that attracts her attention and, I kid you not, she galloped across the street to me. I took out one of the toys (I had to get her her something fun, not just kitty litter) and played with her for a little bit. I opened the door, went in and left the door open and let her decide what she wanted to do. I didn't try to entice her or anything and she came in. I let her check out things for a little bit and when she didn't make any move to head back for the door, I closed it. I gave her some food and she just scarfed it down. Looking at me and meowing, I kind of got the hint that she was still hungry so gave her some more. It was a fairly uneventful night with the exception of when I got up in the middle of the night to go to the bathroom. I guess she thought I was up and it was time to play, because she followed me back to bed and started purring and nudging my hand. She's also a fairly good wake up call. The second my alarm went off this morning, she meowed from down the hall and came running in and started purring and nudging me again. She had another whole bowl of food for breakfast and successfully used the litter box during the night. I think she's still a little confused about where she is, but she seems content.
Posted by Athena's Armoury at 11:39 AM

Check the package of the food and make sure you don't overfeed her. Some cats will beg like they have never been fed seconds after they scarf down a day's worth of food! : )

Also, if you want cat toys--I can point you to some great ones on Etsy. ^_^

Also, also, if you are concerned about vet bills, check the web to see if there are low cost health clinics in your area. Most areas have them one a month to every few months.

Also, also, also...if she is an adult kitty, the vet bills shouldn't be too bad--just annual shots and such. If she's been outside, you will want to check her out for fleas, earmites (black stuff in her ears), and worms (you will know). Those can all be fixed easily, but the sooner you spot them the better!

Amanda, you are too funny. Thanks for all of the advice!
-Janine