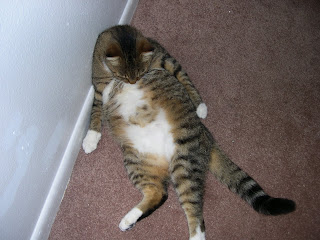 How can this possibly be comfortable?

Well, it's been over a week and I haven't seen or heard anything about a "lost cat." It does seem like the neighbors recognize her, so she's been outside for a while. I considered trying to find her a good home, but I'm thinking that I might just keep her since, after all, she chose me. It's so odd having identified as a dog person my whole life to find myself bonding with this kitty. I've been calling her "Kit" which, of course, is short for kitty. I know it's not very original, but that's what I've been saying since I met her 2 months ago. Scott doesn't like "Kit" because it reminds him of the car from Knight Rider. If that's the case we can call her "KITT" when she's good and "KATT" when she's bad. I don't think I sold him on that idea just yet, but he also hasn't come up with any better ideas.
Posted by Athena's Armoury at 9:59 AM

What a lovely kitty! I also like the picture where she looks like she's scowling, down further on the page.