by AJ Reardon of ErtheFae's Meandering Thoughts
Thanks to the Victorians, most of us have this image of faeries as being tiny winged folk. We might also include elves, gnomes, and leprechauns under the heading of faerie. Perhaps we think only of Tinkerbell and Fairy Godmothers, and maybe the Evil Fairy who gets offended and curses the newborn princess.
But the truth is, the faerie lore of the British Isles is rich, bizarre, and full of creatures that are nothing like the flitting, sparkling spirits we imagine frolicking through the flowers. Today I'd like to tell you about one of my favorite faeries, which I consider to be the most gruesome example of how strange faerie lore can be. That's right, we're going to talk about the Nuckelavee.
Forget your mental image of faeries as small and beautiful. The Nuckelavee is huge and horrific. Similar to a centaur, as imagined by HP Lovecraft or Todd McFarlane, the beast looks like a giant horse, with a man's torso and head rising out of its back. Oh, and did I forget to mention that it appears to be flayed? Yes, just imagine that rising out of the sea, its skinless head lolling on its shoulders, its single red eye staring right at you.
In her “An Encyclopedia of Fairies”, Katherine Kerr describes the Nuckelavee as “One of the most repulsive creatures which the Scottish imagination has conceived; and the Scots are expert in horrors.”  When Froud and Lee included the Nuckelavee in their book “Faeries” (where I first learned of it), they clearly considered it too horrible to draw in full – the illustration instead shows only its arm, reaching towards a tiny, terrified pixie.
Thankfully, the Nuckelavee is a creature of the sea and cannot abide the touch of fresh water. If  you happen to be wandering the Scottish coastline at night and the fearsome Nuckelavee rises from the depths and pursues you across the countryside, you can rescue yourself by splashing into a loch or crossing a stream. Just watch out for waterhorses while you're there! 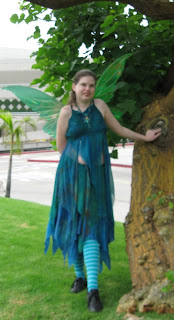 AJ Reardon has been fascinated by faerie lore ever since she received a copy of “Faeries” by Brian Froud and Alan Lee when she was 16. She doesn't actually believe in faeries, but maybe that's because she lives in Tucson, AZ which is not known for its abundance of The Good Neighbors. AJ uses her knowledge of fae and myths to inspire the jewelry that she makes and sells in her on-line shop, Erthe Fae Designs.
Thanks so much to AJ for starting off the guest blogger series with some really awesome faerie lore!  It's so obvious how much her love of fantasy informs her jewelry.  I love the tribal styles and particularly her intricate seed bead work!!  I'm really looking forward to hearing more faerie lore from AJ in future guest posts!  AJ & I are both part of the Fantasy Artists of Etsy Street Team.
Next week's featured guest blogger is Rose from Recreational Art on Etsy and her blog of the same name.  She'll be talking about recycling, upcycling, and repurposing.
Posted by Athena's Armoury at 9:12 AM

Awesome guest blogger. Thanks AJ for delving into the darker side of faerie lore. I love traditional folklore and have been doing a lot of research into Scottish lore since I will be traveling there in Sept. and the Nuckelavee is a fascinating one.

Fascinating post, AJ - I hadn't heard of a Nuckelavee! Plus, you are such a pretty fae.

What a wonderful way to start your guest bloggers series off, Janine. :D

Thank you Athena for giving me the opportunity to write about one of my favorite faeries :)

Kara, have a wonderful time in Scotland!

Aquariann, thank you! That was my costume for Comic Con a few years ago. By the way, riding the trolley with faerie wings on is hard ;)

Wonderful guest post, and I second Aquariann's sentiment- I love that dress AJ!!

The Scots sure had some gruesome fairy tales, all the Celts do really. I have a friend from the Isle of Man who says when she was little her parents would scare them into minding with tales of wicked fairies out to get bad little kids!

Very interesting! I have to confess I'd always seen a mental image of Disney's Tinkerbell when I thought of fairies!