I have been so incredibly busy lately stocking up my inventory as I get ready to vend at the Handmade Holiday Bazaar in a month! One of the many new items that will be available at the fair will be these adorable (if I may say so myself) little Christmas Tree Ornaments: 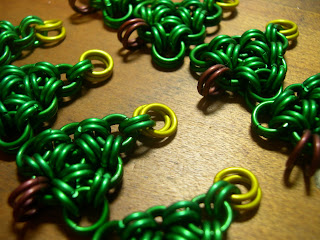 They are made using the Japanese 12-2 weave in anodized aluminum. I still have to add a handmade ornament hook and then they are all done. They'll make their debut in my Etsy shop after the fair!

Last weekend, I spent about eight hours one day and another two the next coiling and cutting rings. There were quite literally thousands of various gauges and sizes by the time I was done and my wrists were a little sore, too.

All of this prep work has had me digging through all of the little plastic baggies that I keep my rings in quite a bit. And getting a bit frustrated when I couldn't find what I was looking for only to cut some new rings and then go back to find that I already had some. The plastic baggie system was not working for me. I've known this for quite some time, but just couldn't find a happy alternative. I had been avoiding using tackle boxes for a few reasons: the compartments are rarely big enough for the amount of rings that I usually have on hand in any given size, the separators are usually removable which means that the rings slip under them and get all mixed up, the whole lid opens and thus doesn't seal each compartment well (mixing rings again), plus when the whole lid opens instead of each individual one, a klutz like me can easily spill a few thousand rings all over the place (not fun). 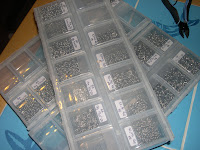 I found these boxes at Joann's yesterday for 40% for their Columbus Day weekend sale. Yeah, the compartments are still a bit small, but each individual compartment opens by itself and they all lock shut! Its so easy to search through my sizes now: they are organized by gauge and increasing ring size in both imperial and metric. Sure, I still have my large baggies full of the rings I use for large projects, but this is sooooooo much easier and more organized.

I only got three to see if I like them (it was hardly enough to organize my stock of bright aluminum rings). . . I may have to get some more. 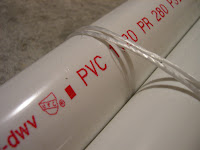 I also got the makings of my tent weights today. Since this is the first fair I'm using my tent at and it happens to be taking place in a parking lot (no stakes in the ground here!), I found I had to deal with this sooner rather than later. I had been absorbing ideas from various forum threads on Etsy for a while and finally decided to go with sand filled PVC tubes. I thought that this was a great, low-profile way since they will be attached to the legs of the tent and not protrude too terribly much: I was concerned that someone might trip on a water filled milk jug. I still have to cut the PVC, attach the end caps, and fill them but that's a job for another day.

I was talking with a woman I work with the other day about the power of positive thinking. She firmly believes that if you put it out there (not "I wish" or "I want", but rather "I will") it will happen. I thought it strange that while wondering around Joann's I happened upon this vinyl wall art and immediately thought of our conversation. I though the universe was telling me something.

Posted by Athena's Armoury at 9:00 PM

The Christmas tree ornaments are too cute! I bet they look great with the lights from a tree sparkling on them! Really unique way to use jump rings, I love it!

I agree! Those tree ornaments are CUTE! I'm glad I'm not the only one in the pre-holiday mood: I just finished up some holiday napkins (which will go up tomorrow I think) and I'm working on holiday mice for the cat rescue.

I love your positive thinking advice as well! I know you WILL sell a heap of those little trees at your upcoming bazaar!

Getting ready for this fair has really given me the kick in the pants I needed to get soooooooooo much done. I'm really looking forward to it!

the ornaments are really cute

oh those ornaments are adorable! I am going to buy one for my tree for the show..so cute!