Women's History Month traces its beginnings to the first International Women's Day in 1911. IWD, as designated by the United Nations, is an event where the political and social awareness of the struggles of women worldwide are brought out and examined in a hopeful manner.

As recent at the 1970's, women's history was virtually an unknown topic in the K-12 curriculum or in general public consciousness. To address this situation, the Education Task Force of the Sonoma County (California) Commission on the Status of Women initiated a "Women's History Week" celebration for 1978. The week of March 8 was chosen to make International Women's Day the focal point of the observance. Word spread like wildfire, and event started springing up across the nation. Responding to the growing popularity of the event, in 1981 Congress passed a resolution making Women's History Week a national holiday. Within a few years, thousands of schools, communities, and organizations began participating in events, educating people, as well as celebrating Women's History Week. In 1987, National Women's History Month Resolution was approved with bipartisan support in both the House and the Senate legally expanding the focus to the whole month of March. 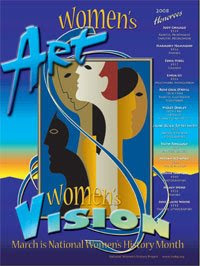 *The theme of National Women's History Month for the year 2008 is visionary female artists. See the honorees.*
In honor of Women's History Month, throughout the course of the month I plan on highlighting some extraordinary women who have made an impact in our world. I look forward to sharing sharing the stories and contributions of some amazing women, both past and present, and hope they inspire you as much as they do me.
Posted by Athena's Armoury at 10:35 AM

I didn't know any of this! Thanks for sharing!

This sounds great! I can't wait to see your upcoming posts!

Thanks, guys! Spread the word and get our herstory out there. =D