Perhaps one of my all time favorites, the first true career woman in the United States, the spark that ignited the women's lib movement nearly thirty years before it officially planted its roots. . . Rosie the Riveter. 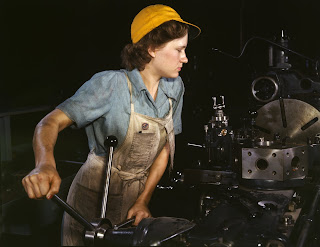 Rosie the Riveter is not one woman, but a cultural icon in the United States representing the six million women who worked in the manufacturing plants that produced munitions and material during World War II. These women took the place of the male workers who were absent fighting in the Pacific and European theaters. The character is now considered a feminist icon in the US, and a herald of women's economic power to come. Rosie and her slogan (We Can Do It!) were featured on posters, magazines, and more.

These women came from all over the country and discovered skills they never knew they had, both as laborers, and as independent women. They were self-sufficient and strong (many of them endured double-shifts on a fairly regular basis), and they eventually discovered new freedoms by earning their own incomes and making their own choices on how to spend that money.

What many people don't know is that the 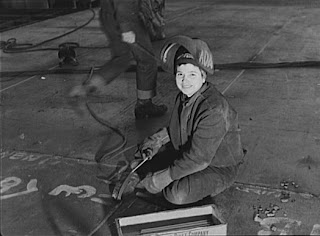 character of Rosie the Riveter was, in fact, associated with real woman Rose Will Monroe. She worked as a riveter at the Willow Run Aircraft Factory in Michigan. She was asked to star in a promotional film about the war effort at home and was also featured in a poster campaign. There was also, albeit briefly, a Wendy the Welder icon fashioned after Janet Doyle, a worker at the Kaiser Richmond Liberty Shipyards in California.

Unfortunately, however, it wasn't all roses. Old films show the armies of the eager, smiling women working shoulder to shoulder with the men, their babies lovingly cared for in official day care. A welder’s visor is snapped up to reveal the immaculately made-up face of an actress who delivers a tidy script about the fulfillment she finds in doing her duty. It was not a bit like that, say the actual women, three decades on. The men did not want women and nobody wanted blacks. Sexist and racial discrimination was virulent; the struggle for unionization and fair wages was met with bullying and lockouts. Families were broken up; they never heard of day care. Standards of hygiene and safety were terrible. Despite everything, however, the women stayed cheerful and funny and brave. They needed still more bravery after the war when their jobs had to go back to the men and the official propaganda changed. The films of the time now strove to return the women to their proper roles of cooking and sewing and serving; the government trailers offered horror pictures of the neglected and delinquent children of undutiful working mothers. Women who had acquired valuable skills could only find jobs as kitchen hands or lavatory attendants.

But you cannot keep a good woman down. This taste of economic freedom and independence may have been put on hold for some time, but the women's liberation movement of the 1970's surged forward. Women may still, to this day, be earning $.70 to each $1.00 a man makes, but imagine where we would be had Rosie not answered that call. 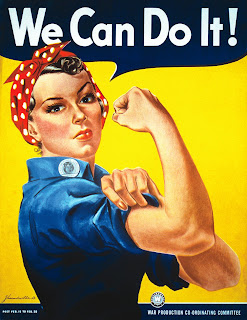 Posted by Athena's Armoury at 3:15 PM

Great post! You can't put the genie back in the bottle...and it was neat to find out Rosie was a real person too.

This is a nice history with great photos.

I know. I love Rosie and what she stands for. I've got her everywhere: posters, a bobble head (on the dash of my Jeep), a license plate, action figures, shirts, a mug, even a bear dressed up like her. Hmm, I sound a little obsessed, don't I?

Hi there! Glad you found that I linked to your post! I had meant to post a comment here that night when I found it, then after cutting and pasting and being up till like 2am creating it, I plum forgot!
Anyhoo, great article!
Best,
Nikki

No worries, Nikki. Thank you so much for the link! I gave you a little shout out in my blog post:
http://athenasarmoury.blogspot.com/2008/07/i-just-very-happily-discovered-that.html