Yesterday, Scott and I attended the Bay Area Renaissance Festival at MOSI in the name of research. Of course it was a ton of fun, but our primary mission was to scope out booths, costumes, and displays as I prepare to build my own. There were quite a few booths that were very professionally done up (read: beautiful and expensive) as well as some that looked like they may be just starting out and maybe not too terribly invested (perhaps they work more in the craft fair market than the ren faire one). There appeared to be many vendors selling commercially made goods and not quite as many hand made artisans and crafters. I also only saw one maille vendor and their main focus was on jewelry. There were lots of really fun display ideas, too: there were the scarves that one vendor used to decorate the inside of her tent, the wooden shades and trellises used for displays, oriental rugs and bamboo matting for floorings, faux animal skins for table coverings, and more.

I felt reassured seeing such a mix of booths and displays: it gives me hope that since I'm just starting out and not investing in one of the $800 booths available, I can still throw something really nice together. It was also nice to see that maille is kind of in the minority among the items for sale. Hopefully, that just means that there aren't many maille vendors instead of a lack of interest in it! I'm also excited about the fact that I'd like to offer more than just jewelry and be able to offer my customers that much more in the way of options. Jewelry will always be a huge part of my inventory, but they will also be able to browse armour, bags, accessories, housewares, and more!

And of course, in the name of research, I had to look into a costume as well! I looked at a few fabric, steel boned corsets and some bodices but didn't really fall in love with any of them. Then I saw the leather corsets. . . I just had to try one on: 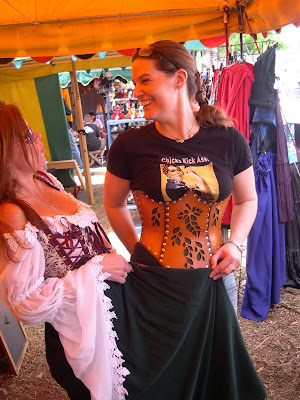 I don't actually know the lady I'm standing with. She just happened to be passing by wearing a green skirt that matched the inlay on the corset. =) I fell in love with it, but could NOT freakin' breathe in the thing. I couldn't imagine wearing it for any length of time, so alas, I moved on. 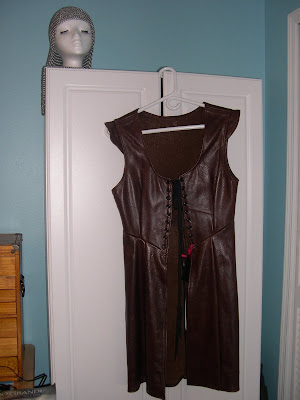 I finally came across this Elizabethan Era Coat, apparently it's the same style Arwen was wearing when she rescued Frodo on the horse in LOTR. I wish I got Scott to take a picture when I was wearing it, but I was too sidetracked thinking about how much I liked it and what I would wear with it. It is a lovely chocolate brown and so soft! The lacing in the front gives a busty look without cutting off circulation! Fun part of the story: I picked up my usual medium but when the shopkeeper saw me, he said "That is WAY too big for you. You need a small." I have no problem with my size, but I nearly hit the floor when he said I needed a small. =D I eventually also picked up a cream colored shirt and some brown leggings to match, now all I need are my boots and accessories and I'll be set! Oh, and the couple of pieces of armour I plan to make for my costume as well.

MISSION ACCOMPLISHED.
Posted by Athena's Armoury at 10:48 AM

Congrats on your awesome find!!! I love the ren faire here, but hubby isn't much into it. I had mentioned the Fairie festival coming up in May and was met with peals of laughter...geuss I won't be going to that either..

Too bad that leather corset was so uncomfortable--it looks great on you. Can't wait to see photos of the finished costume when you get it all together. Glad to know your competition in maille seems to be light!

I love the fact that you were wearing a Rosie the Riveter t-shirt while you were trying on the corset.

Sounds like it will be a very fun event!

Oh my that coat is absolutely gorgeous! I echo the comment about seeing you in the complete outfit..very dashing I'm sure!

Awww, lissa, find a friend to go with! I'm sure you'd have a blast!

green cat: Thank you! I can't wait to see the finished costume either. Just a few more pieces. . . From what I've heard they don't really have a maille vendor who's a regular. Maybe it'll be me!

high desert: I didn't even realize I was wearing Rosie at the time. That's funny.

That coat is GORGEOUS! I also vote for seeing the whole outfit! ^_^

Now you just need one of merrimask's arm dragons and you will be set! ; )

oh its stunning! I can't wait to see the outfit either! :)

Amanda, you temptress! You know I want one of her dragons badly!!

At some point (maybe this weekend), I'll try and throw on what I've got so far. It's incomplete, but you can see what I've got for now.