Women's History Month: It's a Pirate's Life for Me

In honor of St Patrick's Day AND Women's History Month, here's the story of an infamous Irish female pirate. 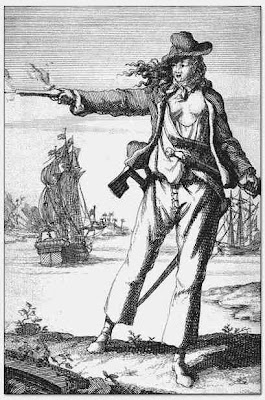 One of the ONLY female pirates in the Caribbean, Anne Bonny immersed herself in a man's world of pillaging, plundering, and piracy. Although, it is hard to separate fact from fiction in her story, one thing that is certain: Anne Bonny was a strong, independent woman who was way ahead of her time.

Born in Kinsale, County Cork, Ireland in 1697, she was the illegitimate daughter of William Cormac (a lawyer) and a servant. William's wife made the adultery public, ruining his reputation and ending his career. William, his wife, and their newborn baby left for Charleston, SC where they bought a plantation and William began his practice anew.

Stories of Anne's quick temper and rebellious nature abound even in her youth. When she was 13, she supposedly stabbed a servant girl in the stomach with a table knife, although it is unclear whether this is fact or purely legend. Another story tells of a young man that she put in the hospital for several weeks, after his failed attempt to sexually assault her. At 16, she married a sailor and small-time pirate named James Bonny. Bonny hoped to win possession of his wife's family estate, but she was disowned by her father who did not approve of the marriage. According to legend, Anne Bonny started a fire on the plantation in retaliation.

They then left for New Providence (modern day Nassau) in the Bahamas, a pirate stronghold, where James became an informant for Governor Woodes Rogers. While in the Bahamas, Anne became friends with many a pirate and actually began a relationship with Calico Jack Rackham. Refusing to divorce her, James complained to the governor, who brought Anne before the court, naked, and sentenced her to be flogged and to return to her legal husband. Anne Bonny took charge of her life and eloped with Rackham. 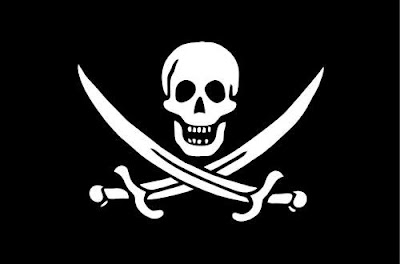 She disguised herself as a man in order to join Rackham's crew aboard the Revenge (pirate articles, or codes, often barred women from the ship). Accounts describing her exploits present her as competent, effective in combat, and someone who gained the respect of her fellow pirates. The love relationship between Anne and Calico was not public, but on the ship, everybody knew that Anne was "the captain's woman". Over the next several years, she and Rackham saw quite a few successes as pirates, capturing many ships, and bringing in an abundance of treasure. Although Bonny is one of the best-known pirates in history, she never commanded a ship of her own. Her renown derives from the fact that she was a remarkable rarity: a female pirate.

Mary Read, also disguised as a man, joined Rackham's crew when her own ship was taken during a raid. Anne and Mary quickly discovered that they had something in common and bonded immediately. Rackham became jealous of Anne's relationship with this new sailor, so soon the cat was out of the bag about Mary's gender. This however, had no effect: she was accepted on board the ship as Anne had been.

In October 1720, Captain Barnet, ex-pirate, now commander of British Navy attacked Rackham's anchored ship. Most of Rackham's pirates did not put up much resistance as many of them were too drunk to fight. However, Anne and Mary, who were sober, fought fiercely and managed to hold off Barnet's troops for a short time.

The crew of the Revenge was taken to Port Royal to stand trial where they were found guilty for the crime of piracy and sentenced to hang. Anne and Mary "pleaded their bellies," announcing that they were both pregnant. In accordance with English common law, both women received a temporary stay of execution until they gave birth. Anne is reported to have chastised the imprisoned Rackham (who wanted to see her one last time) by saying, "I am sorry to see you here Jack, but if you had fought like a man, you need not be hanged like a dog." Mary Read died in prison most likely from a fever; it has also been alleged that she died during childbirth.

There is no historical record of Bonny's release or of her execution. This has fed speculation that her father ransomed her; that she might have returned to her husband, or even that she resumed a life of piracy under a new identity. However, the Oxford Dictionary of National Biography states that "Evidence provided by the descendants of Anne Bonny suggests that her father managed to secure her release from gaol and bring her back to Charles Town, South Carolina, where she gave birth to Rackam's second child. On 21 December 1721 she married a local man, Joseph Burleigh, and they had eight children. She died in South Carolina, a respectable woman, at the age of eighty-four and was buried on 25 April 1782."

Anne and Mary were women who escaped from traditional restrictions and in their own way, fought for equality between men and women. Yo ho ho. . .

Posted by Athena's Armoury at 1:54 PM

See, after reading this, I have to side with the Pirates. I mean women with cutlasses. ; )

Also, I tagged you! : D
http://mrsdragonswares.blogspot.com/2008/03/random-facts-meme.html

There's a great kid's book "The Ballad of the Pirate Queens" about Mary and Anne that my boys LOVED as kids. Great post!

I've read about this before, but enjoyed your blog about it. Also love your chaine maille work!

and, I'm passing on blog-tagging.

You can see the instructions on the top post of my blog.

It's actually rather fun.

that was awesome. I was literally on the edge of my seat!

Thanks for the comments, everyone!

DOH! Tagged twice on this entry!

fairiesnest, that's awesome. I love that your boys loved the book. I've never read it, personally, but have a feeling that it would have a very special place on my bookshelf. =)

ashes: I bet it would look amazing!

Awesome article. I have part of that image as a sticker on my car
"Pirate Girls Rule".
Love it!